Which Keurig K-Cup Brewer Is The Smallest?

Which Keurig K-Cup Brewer is the smallest? Why bother with ‘small’ anyway? Well, a single-serve caffeine delivery machine is potentially the future of home coffee brewing. And usually, ‘small’ is more convenient for homes.

Popularised by Keurig who revolutionized the idea that smaller is better with the invention of their K-Cup pods, the single-serve coffee maker has become a go-to java weapon of choice for the caffeine fan who wants an instant hit of their favorite brew as quickly as possible.

While they popularised the K-Cup pod and made the single-serve machine all the rage, Keurig aren’t the only brand that makes machines that are capable of using their pods to make great coffee, and while they used to rule the world of small brewing single serve makers, Keurig no longer dominates the market the way they once did.

This is why we thought that it was about time that we took a closer look at three of the smallest Keurig capable brewing machines in order to determine whether the company that gave the world the original K-Cup still reigned supreme in the small brewing universe, or whether one of the usurpers had finally managed to do the impossible and topple Keurig from their perch.

Some people call it the K-15, we know it simply as the K-Mini. It’s the smallest of Keurig’s brewing machines and with over four hundred different varieties of K-Cup pod to choose from, it’s still the most popular single-serve coffee maker in the world.

It’s simple to use, you just fill the one cup reservoir with the desired amount of water that you want the K-Mini to turn into coffee, load your chosen K-Cup pod, and a couple of minutes later, you’ll have a delicious cup of single-serve coffee.

At just five inches wide, twelve inches high, and eleven inches deep, the K-Mini is a machine that was made to take up as little space as possible, and that was, and still is, one of its most attractive features for a lot of people.

It was designed to be used anywhere and can be taken anywhere and as long as you have access to a plug socket, water, and a K-Cup pod, you can enjoy a freshly brewed cup of coffee from over seventy-five different globally recognized coffee producers.

But the K-Mini’s strength is also its main weakness as it can only brew coffee from K-Cup pods, and while it’s still a formidable, easy to use, straightforward, and incredibly simple machine that looks good everywhere and makes great tasting coffee, its lack of versatility and has become its brewing Achilles heel. 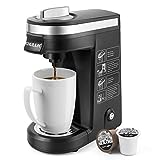 Designed to do exactly the same as the K-Mini, brew coffee from a single-serve pod, the Chulux coffee maker seemingly appeared from out of nowhere and rapidly became a firm favorite with K-Cup pod fans as it does everything that the Keurig does, but it costs a fraction of the price.

The other plus on Chulux’s side, which was and is seen as being a direct challenge to the K-Mini, is its size. Measuring just nine inches high, by four and a half inches wide and seven and a half inches deep, the Chulux is actually smaller than the aforementioned K-Mini.

Admittedly isn’t much smaller, but as it is also relatively easy to use (like the K-Mini, you add the required amount of water that you want it to brew to its reservoir, insert the pod, and hit the button), and brews directly from K-Cup pods, it’s a serious challenger to the K-Mini’s crown.

It also uses a fast brew system that’ll deliver a freshly made cup of coffee in around two minutes for a twelve-ounce cup and half of that time for a six-ounce cup. And cleaning it is even simpler, you just repeat the brewing process without adding a K-Cup pod, and the water that normally brews your coffee flushes the Chulux clean.

The jury is still out on whether or not the new kid on the block can brew in the same inimitable fashion as the old master can, but with a rapidly growing fanbase firmly in place, it’s only a matter of time until Keurig have to go smaller and continue to push the limits of what their smallest, single-serve coffee maker can do or they might just find themselves at the mercy of Chulux.

The greatest trick that the coffee fanatics ever pulled was convincing the world that the Sboly didn’t exist.

It’s easily one of the most versatile single-serve coffee makers that we’ve ever used, and at just over five inches wide and eleven inches high, it’s compact enough to fit on any counter-top or find a place on any desk.

But the real reason that the most devoted of caffeine fiends have tried to keep the Sboly’s existence a secret, is the fact that, thanks to its interchangeable basket system, it’ll brew using both K-Cup pods and coffee grounds.

It’s also straightforward to use, and you can easily switch between filter coffee and K-Cup brewing with the push of a button. Just add the amount of water that you want the Sboly to transform into coffee, either add a pod or fill the basket with coffee, select which you want by pushing one of the two buttons on the coffee maker and you’ll have a delicious cup of steaming hot, ready to drink liquid gold in under three minutes.

The only problem with the Sboly is that there aren’t any problems with the Sboly, which is a little worrying as we can’t help but think about the old adage that questions perfection.

You know the one we mean, that if something seems to be too good to be true, it’s usually because it is and is burdened by some incredibly well-hidden flaw. But as hard as we tried, we couldn’t find the Sboly’s weak point, and that’s, we suspect because it doesn’t have one.

It’s A Small (Coffee) World After All

Strictly speaking, if you’re searching for the smallest Keurig brewer that you can find, one that’ll serve K-Cup after K-Cup of coffee, then the Chulux will absolutely steal your caffeine heart.

However, if you’re looking for a compact single-serve K-Cup brewer that does a little more and goes the extra coffee mile, then you need to look no further than the Sboly. This has everything you could, and will, ever want in a caffeine-making machine.