How Much Caffeine is in Decaf Coffee?

Many people assume that decaf coffee is completely free of caffeine. But this isn’t the case. The average 8oz cup of coffee contains around 7mg of caffeine.

This is a lot less than the average cup of caffeinated coffee. This can contain between 70mg and 140mg of caffeine. Depending on the type of coffee bean and the way it is brewed.

Why does decaf coffee contain caffeine?

No matter which type of decaffeinated coffee you choose, there will still be a tiny amount of caffeine in it.

This is simply because it is next to impossible to entirely remove the caffeine from coffee beans. (And from tea). The process will remove almost all of the caffeine. But will still leave trace amounts. This will only be around 1% or 2% of the original caffeine content.

Decaf coffee does not mean “caffeine free”. This is the reason why the drink is called “decaffeinated” in the first place. Decaf coffee is made from the same type of beans as caffeinated coffee. But it has been through a process that removes the majority of the caffeine.

Coffee can be decaffeinated in several ways. But the most common involves soaking the beans in water with a solvent.

Caffeine is a type of stimulant that is present in certain plants. Most commonly in coffee and tea plants. It is a stimulant of the central nervous system. It is consumed by many people who enjoy the taste. But it is primarily used as a stimulant.

As you were likely told in your high school health class, caffeine is technically a drug. Caffeine is a psychoactive drug. This means that it alters the functioning of the central nervous system. Psychoactive drugs can alter mood, perception, consciousness, cognition, and general behavior.

Is caffeine bad for you?

Is caffeine bad for you? This depends on who you ask. Many people decide not to consume caffeine because they believe it to be unhealthy. And consuming large amounts of caffeine (which a lot of people do) can become unhealthy.

We’ve previously written about the pros and cons of drinking coffee.

Consuming too much caffeine can cause tremors, anxiety, and a lack of focus. We have all been in a situation where we have tried to wake ourselves up. Only to drink too much coffee and be unable to actually focus on what we needed waking up for.

Unlike other psychoactive drugs, caffeine is unregulated in nearly every part of the world. This is because it is safe when consumed in proportional amounts. Unlike a lot of drugs, it’s difficult to overdose on caffeine.

You would have to drink a huge amount of coffee to overdose on caffeine. But this isn’t the case with caffeine pills. Caffeine pills are often consumed by students. Or those who work in stressful situations or long hours. But they can be dangerous. Caffeine pills contain a lot more caffeine than coffee. And can cause an overdose.

The recommended daily intake of caffeine is around 400mg. This will vary depending on your overall size. More than four cups of coffee a day is considered excessive. Especially if you consume this regularly.

Try our caffeine calculator to see how much caffeine you ingest when drinking coffee.

Is caffeine good for you?

When consumed in sensible amounts, caffeine is actually pretty good for you. It can boost your metabolism and aid digestion. The level of alertness it offers can also give you energy to exercise.

There are even studies that suggest that coffee can make you live longer. This is primarily through lowering the risk of heart disease. However, studies are not completely conclusive. And more research needs to be done.

Overall, caffeine is pretty difficult to get rid of. But this isn’t a bad thing. Decaffeinated coffee does have small remnants of caffeine. But this is because the process for removing such an intense substance cannot be 100% perfect.

There are many alternatives to decaffeinated coffee that are completely free of caffeine. Some of them can even be consumed instead of caffeinated coffee. Drinks such as turmeric tea and peppermint tea can provide a natural energy boost, without caffeine.

But, unless you are pregnant or have been advised not to drink caffeine by your doctor, there is no reason to cut it out completely. (Unless, of course, you dislike the taste of coffee.)

Caffeine can have a great effect on your body. And definitely helps to wake you up and gives you energy. But, as with most other intense substances, should only be consumed in moderation. 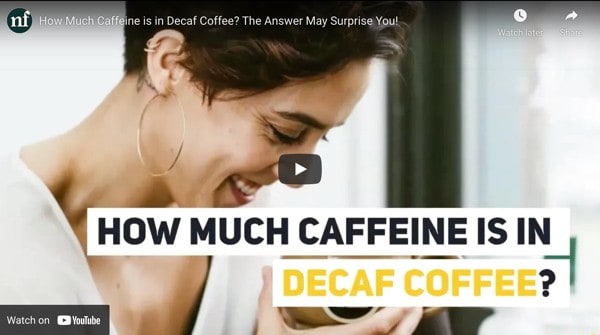