Difference Between Keurig and Keurig 2.0 Brewers

If you like to drink coffee at home regularly, you’ve probably had a Keurig before. If not, you’ve definitely heard of them. A classic beverage brewing system typically used for coffee, you’ll find them in American homes across the country as well as in commercial use.

Having grown exponentially since the company was founded in 1992, not only do Keurig manufacture their eponymous brewing machines, but also their patented K-Cup pods, single-serve containers for making hot and cold coffee, tea, cocoas, and other popular dairy-based beverages.

In addition to your coffee shop favorites, you can also get lemonades, ciders, and other fruity summer drinks. Counting its own branded drinks and licensed partnership products, there are over four hundred different pod variations on the market, so there’s something to suit everyone.

With a simple two-step process – insert pod, press the brew button, and presto! – and instant, delicious drinks every time, it’s no wonder that the Keurig name has become synonymous with a good cup of coffee.

Whether you’re new to the world of Keurigs or wondering if it might be time to upgrade the model you already have and love, we’re analyzing both the original model and the 2.0 upgrade to perform a thorough comparison of the two.

Each machine has its own charm and features to suit different caffeine fiends, so keep reading and find out which product you should opt for if you’re looking at taking the plunge and picking one up soon.

A Look Back At The Classic Keurig

Although there are several different Keurig machines that utilize the original K-pods and do not feature the upgrades from the 2.0 range, we’re looking at the Keurig K55 in this instance, as we believe it’s the most versatile model from that line offering customers the biggest bang for their buck.

As with most classic Keurigs, you can brew multiple drink sizes from one singular K-Pods, depending on your tastes; six, seven and ten-ounce drinks can all be produced, so you can have a stronger cup with a smaller size or weaken the flavor a little with a bigger one.

Speaking of size, the water tank on this baby is particularly large, considering the brewer itself won’t take up that much space on your countertop. You get forty-eight ounces of water with one tank, which equates to at least six cups of coffee before you need a refill.

There’s no guesswork involved with Keurig machines, as handy LED lights tell you when the useful automatic power-off function is activated, if it’s time to fill up the tank with more water or if you need to clean the machine.

Prolonging the lifespan of the K55 model is a breeze with its inbuilt descaling program. Descaling is an essential part of Keurig maintenance, as it eradicates any limescale or calcium deposits that may have built up.

If left untreated, these accumulations can be harmful to your health, as well as causing damage to your brewer, leading to dissatisfying coffee and sickness, both of which you want to avoid! This easy to use feature cleans up your machine at the touch of a button, leaving you to enjoy your coffee in peace.

Whilst the original Keurig is still pleasing hot and cold drinks lovers around the world, it’s bigger, fancier brother boasts several new tricks up its sleeve which could persuade you to trade your old one in or plump for the newer models if you’ve yet to pick one up.

Big Brews (And We Cannot Lie)

Do your family like to share a pot of coffee over breakfast or after dinner, but you find yourselves fighting over who’s turn it is to set up the cafetiere, or, even more time-consumingly, brewing up a carafe with a filter?

Keurig 2.0 machines might just have solved your problem! With this line, the manufacturers have introduced several different pod sizes, including the carafe pods, which can produce up to thirty ounces of coffee, or four cups at once!

In addition to larger drinks, you’ll now be able to find water reservoirs capable of holding seventy, eighty, and even ninety ounces at once. The biggest tank available in the classic Keurig line is forty-eight ounces, but with a 2.0 you’ll be able to brew up a dozen cups before needing to refill.

First and foremost is the addition of an easy to use, touch screen display, which allows you to pre-program and establish your perfect personalized cup. Multiple models exist, each with a variety of options depending on the price point, but size, strength, and temperature control are common preferences you can adjust.

One cool new function of the new 2.0 brewer is the pre-installed RFID (radio frequency identification) pod reader, which automatically scans the label of your chosen drink vessel and adjusts the machine’s settings on your behalf to produce an optimal cup, though you can always change these before you hit brew if you like.

However, this also poses a potential downside: the original K-Pods don’t feature a label, which means, unfortunately, they won’t be recognized by the Keurig 2.0. If you have a bunch of first-generation pods leftover, they’ll be rendered useless without a classic Keurig.

Additionally,  you can no longer choose to use alternative brands of third-party beverage pods in your Keurig, as only the official K-Cup pods made specifically for use with the 2.0 brewer will be recognized by the reader.

Without the specially labeled rim, a Keurig trade secret, a pod is incompatible with the machine, so you’re forced as a consumer to stick to their brand without resorting to the – usually cheaper – knock-off or imitation products.

However, that doesn’t mean you’re limited in terms of choice, as there are 2.0 pods available from affiliates such as Starbucks, Dunkin’ Donuts, Green Mountain Coffee, and Folgers, amongst many others, even if they are on the pricier side.

Although this wasn’t available on the 2.0’s initial release, it’s now possible to pick up a refillable K-Cup pod, which you can choose to fill up with your favorite ground coffee from anywhere and use over and over again, so really, it’s not that big of a deal besides a loss of convenience. 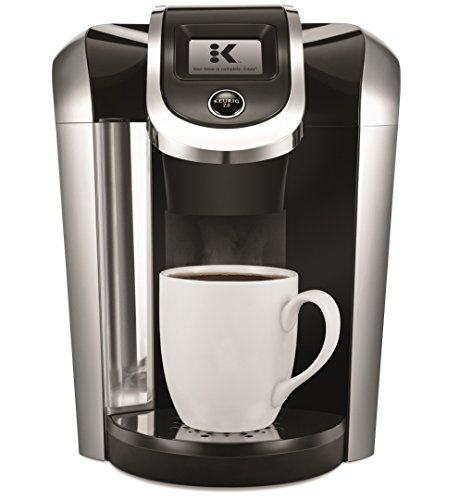 Which should you go for?

Okay, we have pitched both Keurigs old and new to you, each with some pros and cons under their respective belts, but it might be that you’re still unsure about which machine is right for you.

We think that if you haven’t already got a Keurig, you aren’t too bothered about the automatic functionality and you’d prefer to spend less money, then you’re going to be satisfied with an older model, so there’s no point in fronting the extra cash for those shiny new features.

On the other hand, if you’re looking to treat yourself and you’re a fan of being able to tailor each beverage with specific settings that suit you, then why not consider a 2.0? You’ll appreciate it’s additional features, but need to be careful not to accidentally purchase pods that are only compatible with older models.

Likewise, if you’ve already got a Keurig but you’re checking out some fresh machines, then remember that any leftover K-Cup pods for your current brewer are not going to work when you open up your brand new one. Finish them off first, or maybe even look at the step-up 1.0 model next in line from the one you have.

Should you have a larger family, or share a machine with your roommates, even just like to brew up your coffee for the day in one big pot, then you should bear in mind the varying tank sizes.

As we said, with a classic brewer, you’ll be able to get tanks up to forty-eight ounces, with the capability to use one size of pod for making three different drink sizes, depending on the strengths you like.

With a 2.0 machine, however, the tanks are almost twice the size of their first-generation counterparts, and the varying pod sizes mean you can make up to eleven different drinks in a multitude of sizes.

So, if you want to make more coffee at once, or be more versatile in the kinds of drink sizes you can whip up, then it’ll be worth spending the extra cash on a 2.0 for those new capabilities, as they’ll work to your lifestyle and allow everyone in your household to have a drink that suits them.

However, if you’re the only one in your house who drinks coffee, the machine won’t be used as regularly, or you don’t care what drink sizes you have at your disposal or about inputting your own preferences, then we’re sure that a 1.0 brewer will be just fine to satisfy your needs.

Please note that some links in our articles are affiliate links. This means we will earn a commission, at no cost to you, if you click a link and make a purchase. In particular, Goodcoffeeplace.com is a participant in the Amazon Services LLC Associates Program, an affiliate advertising program designed to provide a means for sites to earn advertising fees by advertising and linking to Amazon.com. Our opinions and reviews are unaffected by the affiliate system. Please also see our privacy and disclaimer pages. Thank you.